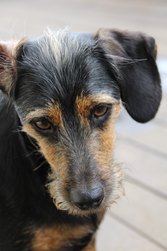 Jack came from RSPCA as a healthy, de-wormed, vaccinated and micro chipped happy puppy. During the first days he showed signs of “reverse sneezing” – short episodes of difficult breathing, with the very typical sound and behaviour associated with this. It is not dangerous to the dog, though it may be uncomfortable, but it is surely distressing for the owner. The reverse sneezing can be as a result of allergies or a little ‘cold’ or just stress, so at the first I did not give it too much attention as Jack was in a new environment.

His attacks were becoming more frequent – day and night, but otherwise he was still a happy, hyperactive little boy. My husband Jock became very concerned when Jack was having these difficulties as often as 2-3 time at night and actually forced me to call a local vet.

About that time Jack had some ‘hard play’ with the neighbour’s goat and came home very sore on his front leg. I performed on him basics of the Canine Touch and also addressed some tight muscles around his chest. He really did enjoy his first session and even lay down for the whole time (very unusual for dog who normally acts as Ping-Pong ball!). Next day he was perfect – not even a limp. To our surprise we also noticed that he did not have any issues with his breathing – nothing during the day, nothing during the night! From that little CT session the reverse sneezing completely disappeared.

I drew the performed procedures into diagram and shared it with our Equine Touch students in our newsletter. I have received great reports and feedback about other 6 or 7 dogs, when after the one initial CT session the reverse sneezing diminished or disappeared.